(DIAGNOSTIC IMAGING) -- by By Rebekah Moan Nighthawk remains poised for growth despite a recent announcement that it is closing some offices and cutting jobs, according to a financial analyst who follows the company. On June 11 Nighthawk announced in its 8-K filing to the Securities and Exchange Commission its plan to reduce operating costs by closing offices in San Francisco and Austin, TX, and a portion of its facility in Coeur d’Alene, ID. The company will lay off 35 employees. Nighthawk… Continue

About the White Paper: For those who do not know what is Vendor Neutral Archive or VNA, the term is used by many vendors of PACS software to identify the core of their product--the component
that is used to reliably manage, store, retrieve, and query medical
images and related information. Unfortunately, there is no "official"
definition of the functionality of a VNA. As such, VNA offerings vary
from vendor to vendor. The result is confusion among users…

This workshop will provide participants with American Heart Association ACLS® Certification and provide a full day of emergency airway management techniques. Course consists of didactic lectures, intensive imaging, discussion and hands -on workshop with the world's most realistic airway mannequins and patient simulators.

Audience: This course is appropriate for physicians, dentists, nurses and all allied health and dental…

ACR Case in Point Preview for this Week 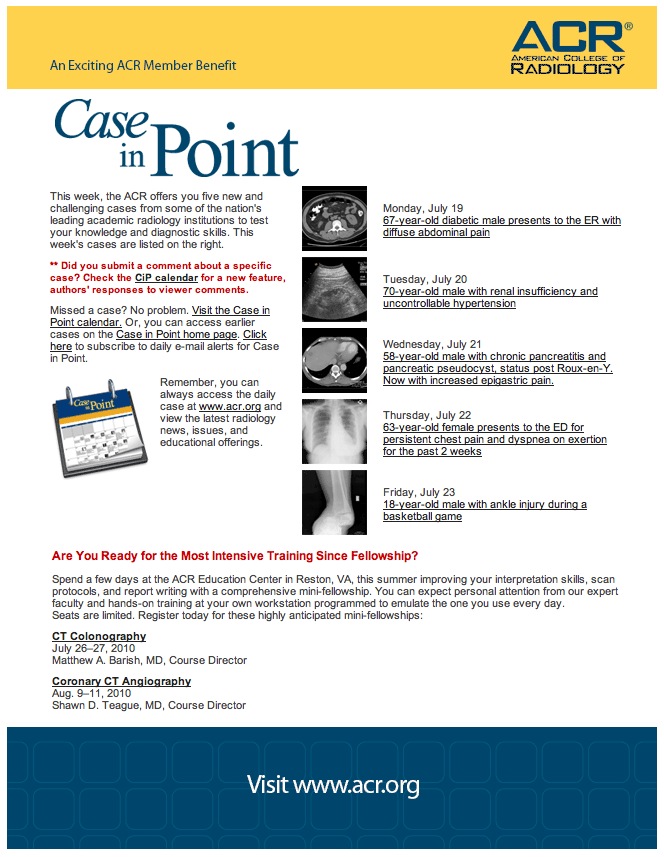 The Centers for Medicare and Medicaid Services (CMS) has released quality of care data for hospitals participating in the Hospital Outpatient Quality Data Reporting Program (HOP QDRP). This data is posted on the Hospital Compare website.

The Hospital Compare website was created jointly by CMS and the Hospital Quality Alliance (HQA) to make data available to patients, families, and providers on hospital performance and quality of care for certain services. The intent is to help… Continue

Radiopaedia releases iPad App! Another radiology app for us radiologists to play with

RADIOLOGY TEACHING FILES APP FULLY OPTIMIZED FOR iPAD
Collaborative Learning for Radiological Community has Never Been Easier or Looked Better as
Teaching Files Make the Most of the Large Touch Screen and Vivid Display of the iPad.

Melbourne, Australia, July 1, 2010 – Radiopaedia.org, a collaborative, online resource for the global radiological community, is pleased to announce that… Continue


n a report bristling with documentation, the Medicare Payment Advisory Commission issued a broad-ranging critique of in-office self-referred imaging and outlined a series of steps to curb practices it said were contributing to the growth in imaging volume.


The benefits of the Summary Care Record (SCR) scheme, introduced as part of the National Programme for IT (NPfIT), appear more modest than anticipated, according to a study published on bmj.com June 17.

The findings are based on an independent evaluation by researchers at University College London and come as the new coalition government in the U.K. announces a review… Continue

DSCT.com: CT users consider a dose of < 1 mSV to be viable for CTA of coronary artery disease

community for dual-source CT in radiology and cardiology – asked the
website’s visitors at what dose level they would consider a CTA to be a viable
option for early detection of coronary artery disease. 363 participants took a
vote showing a clear result: 42 % gave a figure of less than 1 mSV (see fig.
1). …
Continue

Auntminnie: PET/CT beats CT in NSCLC staging, but both have limitations

(AUNTMINNIE.COM) - "PET/CT beats CT in NSCLC staging, but both have limitations"

It appears that researchers have found PET/CT is much more accurate than CT alone for evaluation and staging of non-small cell lung cancer (NSCLC). To read more about this latest research development in radiology, please visit Auntminnie.com directly here.


An intractable foe of what makes people what they are suddenly seems vulnerable, and it is imaging that has struck the blow. In a clinical trial at Johns Hopkins University, a PET agent built around fluorine-18 readily and safely distinguished the brains of Alzheimer’s disease patients from those of healthy volunteers. And the Johns Hopkins researchers are not alone. Several… Continue

Philadelphia, PA – June 24, 2010 – Walter J. Curran, Jr., MD, was elected to a fourth term as group chair by the principal investigators of the Radiation Therapy Oncology Group (RTOG). Curran, who has held the group chair position since 1997 is the executive director of the Winship Cancer Institute of Emory University in Atlanta Georgia. RTOG is a National Cancer Institute-funded national clinical trials group and is… Continue

Nighthawk remains poised for growth despite a recent announcement that it is closing some offices and cutting jobs, according to a financial analyst who follows the company.