Radiologists have felt the effects of the Deficit Reduction Act of 2005 far more than nonradiologist imagers, according to a study in the Journal of the American College of Radiology. When Congress slashed Medicare reimbursement for medical imaging procedures, nonradiologists offset the loss by referring more patients to their own equipment (JACR… Continue “An invaluable course for my professional development” stated one of the 25 graduates from the 2009 Clinician Educator Development Program (CEDP). Designed to help junior faculty develop a career as a clinician educator, this course will be offered again during the 2010 ARRS annual meeting on May 1, 2010 in San Diego. It is specifically tailored to the aspiring radiology educator… Continue

If it becomes law, a bill currently sitting in Congress designed to increase breast cancer awareness and prevention among women aged 15 to 39 could lead to a significant jump in the number of screening exams. Whether these exams would be medically warranted or just motivated by fear, breast imagers say, is open to question. In March, Rep. Debbie Wasserman Schultz (D-FL) introduced the Breast Cancer Education and Awareness Requires Learning Young (EARLY) Act of 2009. The law calls for $9 million… Continue

Nonelderly adults are exposed to excessive doses of radiation from medical imaging procedures for which clinical data are lacking, according to reports published today in the New England Journal of Medicine. Radiologists and others familiar with the reports, including the American College of Radiology, cautioned against giving them too much credence. A retrospective cohort study covered more than 655,000 patients younger than 65 years and found a majority underwent at least one imaging… Continue

We would like to invite you to register for the Clinical Cardiac CT Imaging 2009 course which will take place at the Richard B. Simches, Boston on beginning on Friday, September 11 to Saturday, September 12.

The first Radiopaedia Radiology Teaching File is now available for download (free) from the itunes appstore... 50 CNS cases comprising 170 images, questions and detailed text. Just search for radiology and you should find it easily enough. ( a quick screen capture video is available http://bit.ly/6PdOe ) The next volume (50% done) is abdomen. We would of course like to hear feedback, and would appreciate it if you could spread the word. …
Continue

Enter "The Universal Inbox" for medical imaging, lifeIMAGE, a startup based in Newton, Massachusetts. lifeIMAGE spearheaded by Hamid Tabatabaie, former founder of AMICAS and CEO. If his previous track record holds true, lifeIMAGE will likely enhance the practice of radiology and medical imaging workflow practices. According to their website, lifeIMAGE is a venture-backed startup company developing Web-based applications and services that help… Continue

Interventional radiology providers in the U.S. and abroad will be asked to remember something simple but fairly important when caring for pediatric patients from now on: Step lightly. The Alliance for Radiation Safety in Pediatric Imaging has expanded its Image Gently campaign to include interventional radiology, building upon previous efforts to raise awareness of the need to reduce radiation exposure from medical imaging. …

Radiologists who believe that Washington insiders have targeted medical imaging for financial cutbacks can find plenty of evidence to raise concerns in a recent report on Medicare costs published by the Medicare Payment Advisory Committee. “Data Book: Healthcare Spending and the Medicare Program,” a 198-page report released by MedPAC in June, is peppered with the statistics indicating that medical imaging continues to fuel rapid Medicare spending growth, although it excuses radiologists from… Continue

Scores of radiologists from private imaging centers in the New York City metro area and thousands of their patients have organized to pressure their representatives in Congress for support in preserving access to imaging services. Their approach targets key players dealing with health care reform. “We have access to legislators who are much more in tune with (healthcare reform) as opposed to other campaigns that may not have direct access to the lawmakers who have a say in national policy,”… Continue

The Society for Imaging Informatics in Medicine, the leading international society in imaging informatics, will host its 2010 Annual Meeting in Minneapolis Minnesota, June 3-6, 2010. At the SIIM 2009 Annual Meeting attendees experienced a rejuvenated Scientific Program, not only in the quality of research being presented, but through innovative peer-oriented sessions. Scientific presenters had the opportunity to provide immediate feedback to attendees’… Continue

The chairman of the American College of Radiology Board of Chancellors issued an open letter to Barack Obama urging the White House to include medical malpractice reform as part of healthcare reform discussion. In the letter dated August 12, Dr. James Thrall wrote that he felt compelled to respond to a senior administration official who said in a recent American Board of Radiology forum that malpractice reform was excluded from discussion because the White House had not heard from physician on… Continue

Findings from a Washington, DC, study suggest that cardiac CT performed before repeat cardiac surgical revascularization may lead to safer and more cost-effective operations. Preoperative CT was also linked to a higher likelihood of improved peri- and postoperative outcomes in these patients. "This is the first study looking at perioperative outcomes in association with cardiac CT as a way to guide and map substernum structures," said senior investigator Dr. Allen J. Taylor, director of… Continue

The Centers for Medicare and Medicaid Services (CMS) recently announced a proposed decision to cover FDG PET for initial staging of cervical cancer, but to exclude coverage for diagnosis of the disease. This proposed decision is consistent with request made by the ACR and the Society of Nuclear Medicine in a joint letter sent to CMS in July 2009.

The College holds that this coverage proposal is in the… Continue

A review article asserting breast MRI does not improve surgical planning, reduce follow-up surgeries, or reduce the risk of local recurrences is drawing fire in the breast imaging community. In the past few years, radiologists have used MRI in preoperative staging for women with newly diagnosed breast cancer because it detects additional cancer. The recent review article questions the utility of MRI and says the modality does more harm than good, since there is evidence MRI changes surgical… Continue

When it comes to determining the cause of death for fetuses, parents may have another option besides conventional autopsy. Whole-body high-field MRI offers a reliable option for postmortem exams in a less invasive way, according to British researchers. Past scandals in the U.K. have reduced postmortem autopsy rates for fetuses. In 2001 it was reported that Alder Hey Children's hospital in Liverpool, U.K., had retained hearts and other organs from hundreds of children and fetuses who died at the… Continue 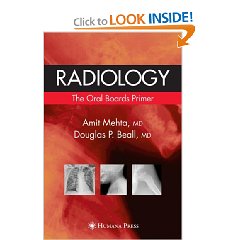 A must have for radiology residents studying for their written or ABR radiology boards! A full descrption: "A concise and comprehensive review of findings and differential diagnoses found on the oral board examination for diagnostic radiology. Drawing on pertinent and key differential diagnoses, the authors have assembled and organized the diagnoses… Continue

The booming growth of fluoro-guided minimally invasive interventional procedures in developing countries is exposing the adults and children receiving treatment to extraordinary levels of ionizing radiation, according to the International Atomic Energy Agency. "We found that a substantial number of coronary angioplasty procedures performed in the developing countries in this study are above the currently known dose reference level," said IAEA senior investigator and study coordinator Madan M.… Continue