RSNA 2009: Too Much Physical Activity May Lead to Arthritis

CHICAGO — Middle-aged men and women who engage in high levels of physical activity may be unknowingly causing damage to their knees and increasing their risk for osteoarthritis, according to a study presented today at the annual meeting of the Radiological Society of North America (RSNA).

"Our data suggest that people with higher physical activity levels may be at greater risk for developing knee abnormalities and, thus, at higher risk for… Continue

CHICAGO — Radiologists can accurately diagnose acute appendicitis from a remote location with the use of a handheld device or mobile phone equipped with special software, according to a study presented today at the annual meeting of the Radiological Society of North America (RSNA). 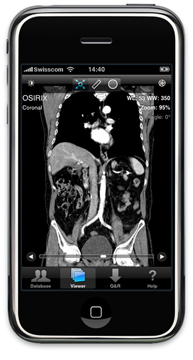 "The goal is to improve the speed and accuracy of medical diagnoses, as well as to improve communications among different consulting physicians," said the study's… Continue

MILWAUKEE--(BUSINESS WIRE)-- Merge Healthcare (NASDAQ:MRGE), announced today that InSite One, a leading service provider of medical data archiving, storage, and disaster-recovery solutions, has expanded its contract with Merge to provide a universal viewing solution for their InDex® archiving services. “We are excited about joining forces to bring new InDex® solutions into additional verticals… Continue

Carestream Health will show work-in-progress upgrade to its PACS at the upcoming RSNA meeting that will allow cross-site reading through a unified global worklist. The new capability will allow radiologists to add key images, measurement results, and other content directly into reports with the click of a button or through voice commands. A single display interface will associate imported DICOM and non-DICOM data into an existing patient portfolio, complementing the current ability of the PACS… Continue

Stay Ahead of the Learning Curve

Visit the ACR booth #6403A at RSNA 2009 in Chicago to speak with the ACR staff and preview the latest education products essential to your profession. Here’s what you can expect to discover at the ACR booth, Nov. 29–Dec. 3, 2009:

Get more than 100 pages of the newest, relevant casework from outstanding chest radiology experts with the latest release from the Continuous Professional… Continue

New functional imaging applications for the Ziostation System will be unveiled at the RSNA annual meeting REDWOOD CITY, CA November 17, 2009 -- Ziosoft®, Inc. a leader in advanced visualization and analysis software for medical imaging will feature its next generation of workflow enhancements and new clinical functionality for the Ziostation® system during the 95th Scientific Assembly and Annual Meeting of the Radiological Society of North America (RSNA) at Booth #8353 (North Hall). The… Continue

zioTerm Software will be Offered Initially to the Academic and Research Communities REDWOOD CITY, CA, Nov. 24, 2009 -- Ziosoft®, Inc. a leader in advanced visualization and analysis software for medical imaging, is offering its new zioTerm™ basic 2D/3D software free to the academic and research communities. The Windows®-based software can be used for reviewing DICOM 3.0-compatible imaging data from CT, MR, PET, ultrasound and X-ray on a local computer connected to the internet. This software… Continue

New KLAS report: The Growing Market for Anesthesia Software: Liability, Integration and the Benefits of Adoption

* However, every AIS product KLAS measured generally earned high marks for ease of use and frequently saw strong adoption within the anesthesia department.

* In the past,… Continue

(DIAGNOSTIC IMAGING) -- With no major health organization advising delay, the Radiological Society of North America is moving forward with its 2009 meeting, despite evidence suggesting the week-long event will be held in the midst of an H1N1 flu epidemic.

More than 60,000 people are expected to attend the RSNA scientific sessions and technical exhibits at McCormick Place in Chicago Nov. 29 to Dec. 4.

(CHICAGO) -- Every year, the RSNA puts up the largest medical conference in the world. With such a vast number of exhibits, abstracts, courses, and lectures, how does one approach the RSNA? Gone are the days of lugging around the thousand page program guide. RSNA has made significant advances in their website. Their website is evolving yearly to make browsing the RSNA program easier and easier. This year's online RSNA program is probably the best we have seen. …
Continue

(AMERICAN COLLEGE OF RADIOLOGY) -- On Nov. 19, 2009, the U.S. House of Representatives voted 243-183 to approve HR 3961, the Medicare Physician Payment Act that seeks to reform the way Medicare pays physicians. This bill repeals the sustainable growth rate (SGR) formula and provides an MEI, or Medicare Economic Index, update for 2010 instead of a 21 percent Medicare physician payment cut. It also eliminates all debt associated with the SGR that has accumulated over the years because of… Continue

(DIAGNOSTIC IMAGING @ RSNA 2009) -- The evolution of neuroradiological research from anatomy to biochemistry can be seen in the frequency with which MRI techniques have led to research that will be presented at the 2009 RSNA meeting. Nearly all of the hottest papers this year employ some form of physiological or metabolic imaging. These techniques expand the horizons of medicine because most chronic, degenerative, metabolic, and inherited brain diseases demonstrate few anatomical findings,… Continue

(DIAGNOSTIC IMAGING @ RSNA 2009) -- RSNA meeting attendees can expect health services scientific sessions to focus on quality, according to the committee chair. The sessions will define quality and how radiologists can work on the entire care experience. "We are more than the images and reports we generate," said Dr. Ruth Carlos, chair of the RSNA subcommittee on health services policy and research. "We are active participants in the patient care process, and it is up to us to make sure that… Continue

(DIAGNOSTIC IMAGING @ RSNA 2009) -- Rather than retreating after the hard blow handed them by the Centers for Medicare and Medicaid Services, which refused to grant reimbursement for the application in May, CT colonography researchers will arrive at the 2009 RSNA meeting with more of what CMS wants: hard data. CMS' decision intensified the debate on CTC's worth for colorectal cancer screening and whether it should be accepted in routine practice. When it came to CTC's alleged weaknesses, the… Continue

(RESTON, VA) -- The American College of Radiology (ACR) is pleased to see that Secretary Sebelius has reaffirmed that mammography is a vital and lifesaving tool in the battle against breast cancer. We strongly urge women and providers to continue to adhere to the current American Cancer Society and American College of Radiology policies regarding mammographic screening. Additionally, as the Task Force is referenced in health care reform legislation as a significant factor in determining which… Continue

(DIAGNOSTIC IMAGING) -- RSNA Preview Musculoskeletal scientific sessions at the RSNA meeting will address the use of dual-energy CT in multiple settings, including the possibility of combined heart and bone density scans. Submitted papers also show the use of dual-energy CT for imaging other indications, such as gout. "When we do a dual-energy CT scan it requires a lot of time and a lot of imaging and so the question becomes what else can we use that data for?" said Dr. Michelle Barr, RSNA… Continue

Celebrating Passionately Pink Day at Our Hospital 2009 On October 21st 2009 our department celebrated Passionately Pink Day to raise funds for the
Susan Komen foundation. The staff made donations to wear pink to work for the day, almost everyone participated. Nancy G. Brinker promised her dying sister, …
Continue

(DIAGNOSTIC IMAGING) -- DeJarnette Research Systems will showcase newly developed storage services at RSNA 2009. The offerings, dubbed iNA SST (Simple Storage Technology) and iNA Premium, are based on Internet Neutral Archive technology that extends the company’s own xDL to allow offsite storage. The “Software as a Service” products enable reliable storage and retrieval of DICOM objects to and from the “storage cloud”, which is achieved by networking computers together over the Internet.… Continue