(ARRS) -- Residents and fellows are invited to submit applications for the 2010 ARRS Residents in Radiology Awards. One award of $2,000 and two awards of $1,000 each are given for papers on the clinical application of the discipline of radiology and radiological science. The award winning papers will be presented during the 2010 ARRS Annual Meeting in San Diego on May 3. 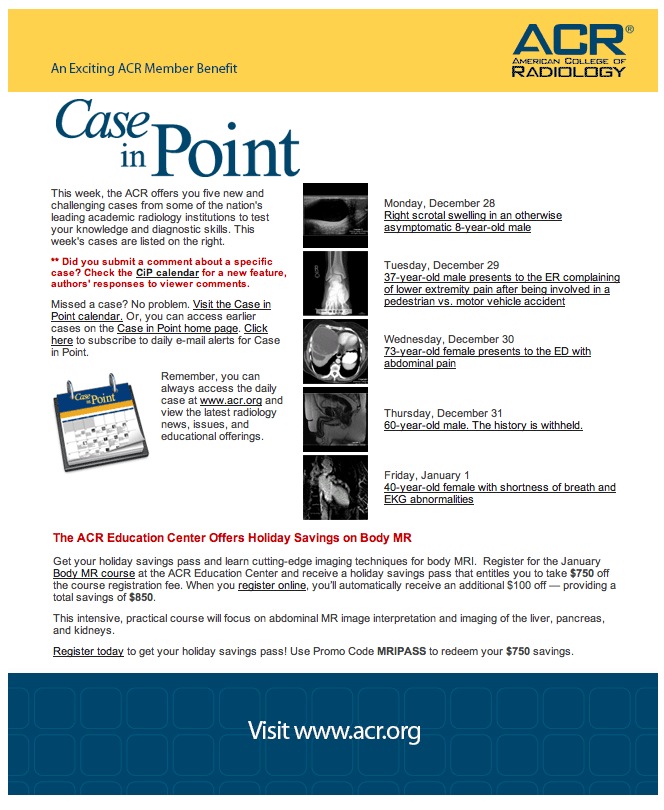 (SIMPLY HIRED) -- Ever wonder how much the average CT tech makes? Well, SimplyHired.com has completed a survey based on aggregated job salary data in radiology. The results demonstrate that the average salary for CT techs / jobs is approximately $47,000. Please see below for more details regarding specific salary data for CT techs. 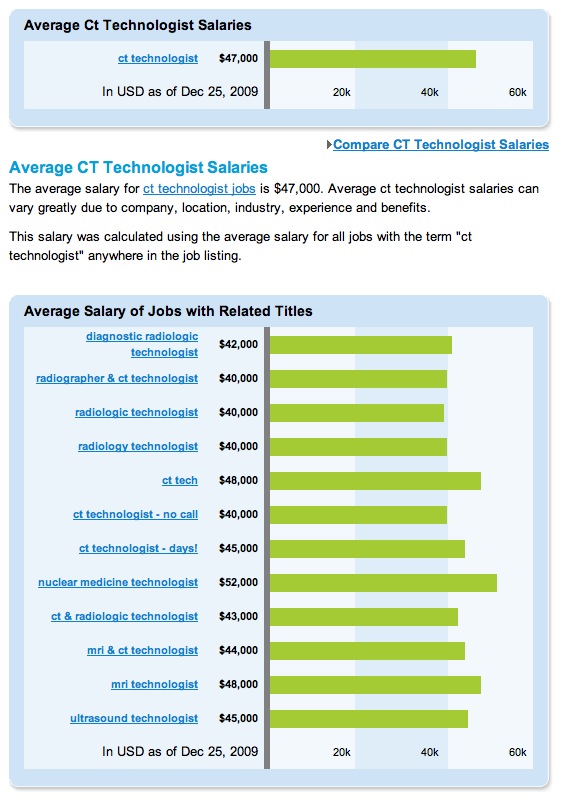 Kevin's Covers - Adjustable IV and Indwelling Catheter Covers (and beyond)

radRounds Radiology Network is pleased to introduce you Carolyn Grissom who has created an entire series of products that can be used by interventionalists, PICC nurses, and anyone who places intravenous lines.

Kevin’s Mom, Carolyn Grissom, made his (Kevin's) first fabric Cover Sleeve after the cap of his PICC line caught on a doorknob; the only options they were offered at the Emergency Room at Duke Medical Center was to cover the… Continue

Abstract: MRI plays an important role in managing patients with cardiomyopathy by determining the presence or extent of ischemic scar… Continue

(DIAGNOSTIC IMAGING) -- The use of renal mass biopsy to guide treatment decisions for small renal tumors is cost-effective relative to direct surgery, and can spare many patients unnecessary surgical procedures, according to Massachusetts General Hospital researchers. Most small renal masses are detected incidentally in imaging and their current treatment is direct surgery, said lead researcher Dr. Pari Pandharipande, a radiologist in the abdominal imaging and interventional radiology… Continue 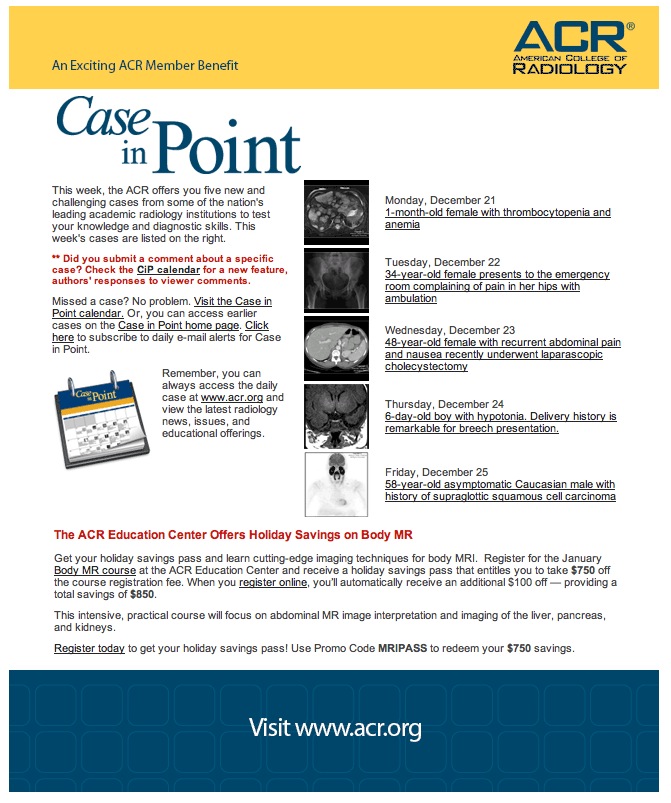 FONAR Corporation (NASDAQ: FONR), The Inventor of MR Scanning, announced today that the Center for Diagnostic Imaging (CDI) (Minneapolis, MN) has purchased a third FONAR UPRIGHT® Multi-Position™ MRI. It is scheduled to be installed in CDI's OpenScan MRI center in Duluth, Minnesota, replacing the current low-field open-sided MRI scanner in that center.
"This is the first and only FONAR UPRIGHT® Multi-Position™ MRI scanner in Northern Minnesota," said Rick Long, Regional Vice President,… Continue

We are pleased to announce that the International Journal of Computer
Assisted Radiology and Surgery (IJCARS) has been accepted for indexing in
Medline and Index Medicus. This news should encourage potential authors
who intend to submit a full paper for CARS 2010 or an abstract with
possible extension to full paper at a later date.

IJCARS began with Volume 1, Number 1 in March 2006 and became eligible for
indexing in Medline by the… Continue Check out the Siemens International CT Image Contest – "highest image quality at lowest dose" Should a patient have a CT examination or not? The decision made is almost always a medical one. Does the potential benefit outweigh possible radiation risks for the patient? While CT imaging entails a dose of radiation, it undoubtedly provides valuable information about our health and supports the physician in making the right diagnosis. In maximizing… Continue

RSNA 2010: In Pursuit of Excellence - Preview and Important Dates

(RESTON, VA) -- Transmittal 1823, that was issued to provide instructions on Place of Service (POS) and Date of Service (DOS) is rescinded and replaced by Transmittal 1873, which announced the delay of the implementation date for DOS requirement to July 1, 2010. While CMS previously issued the POS guidelines to submit the ZIP code for the location of the service, the DOS guideline to use the date of interpretation is new. Note: the place of service requirement in this manual remains effective… Continue

Please join us for the 2010 ARRS Annual Meeting at the Manchester Grand Hyatt in San Diego, CA. The meeting offers 57 CME credits and is designed to meet your educational requirements, whether you need credits in a particular subspecialty area or are interested in attending courses covering a variety of subspecialties.

(DIAGNOSTIC IMAGING) -- The ability to self-refer may explain why cardiologists were better able than radiologists to adjust to Medicare rate cuts after the implementation of reimbursement reforms from the federal Deficit Reduction Act of 2005. By delving into the Medicare Part B database, Dr. David Levin, a professor of radiology at Thomas Jefferson University Hospital in Philadelphia, identified stark differences in imaging-related payment and utilization patterns for cardiologists and… Continue

(RESTON, VA) -- Medical imaging exams have been directly linked to greater life expectancy, declines in cancer mortality rates, and are generally less expensive than the invasive procedures that they replace. However, widespread use has resulted in increased radiation exposure for Americans.

The American College of Radiology (ACR) advises that no imaging exam should be performed unless there is a clear medical benefit that outweighs any associated risk. The ACR supports the ‘as low… Continue