(DIAGNOSTIC IMAGING) -- PACS vendors in the technical exhibition at ECR 2010 are demonstrating some of the hottest gadgets that will be filling the toolbox of tomorrow’s distributed radiology services.

Facing the intractable problem of stretching finite resources to meet an ever-growing demand, healthcare providers are increasingly seeking regional, or even national, solutions. New technologies offer the hope of being able to maintain quality of service by sharing professional… Continue

Washington, DC – Marilyn Goske, MD, chair of the Alliance for Radiation Safety in Pediatric Imaging and Silverman Chair for Radiology Education at Cincinnati Children’s Medical Center, along with several key members of the Image Gentlysm Steering Committee will highlight the unique concerns associated with the imaging of children at the U.S.… Continue

Washington, DC ─ E. Stephen Amis, MD, FACR, co-chair of the ACR/RSNA Joint Task Force on Adult Radiation Protection and past chair of the ACR Board of Chancellors, and Richard L. Morin, PhD, FACR, chair of the American College of Radiology Safety Committee, will represent the ACR… Continue

(WASHINGTON, DC) -- According to the latest article in the NY Times covering radiology and radiation issues, this article discusses how warnings by scientists and government experts about CT scans were "ignored" by the FDA. Now there will be a two day hearing called by the FDA to discuss how patients can be protected from unnecessary radiation. There is increasing awareness and also fear of the risks of routine radiology by various physician groups and patients. To read more, please visit the… Continue 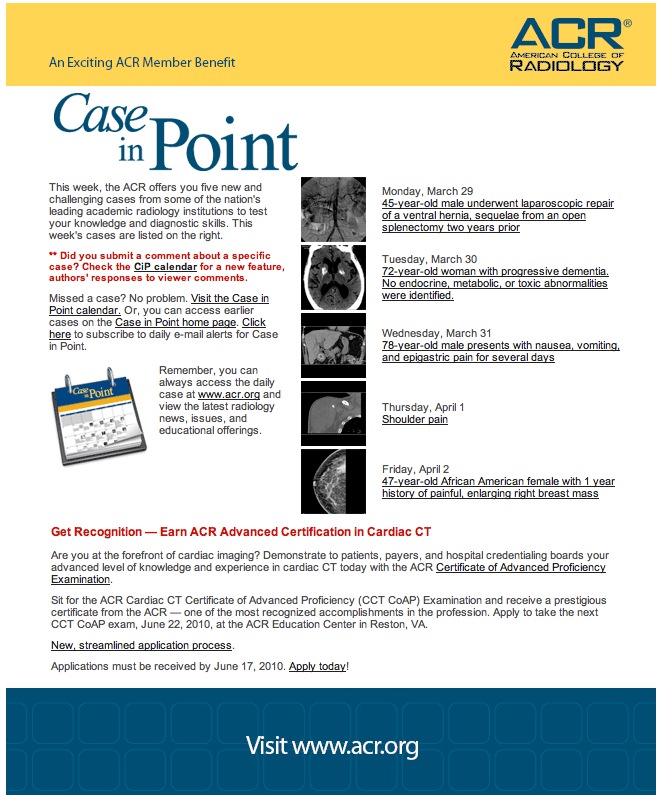 (DIAGNOSTIC IMAGING) -- The exhibition booths occupied by vendors of ultrasound systems at ECR 2010 are likely to be very busy places throughout the congress. Difficult economic conditions are causing a dip in global demand for the more capital-intensive modalities like CT and MRI, and hospital managers are keen for their staff to explore the clinical potential of this versatile and cost-effective technology.

Brief Update: The latest version of Osirix 3.7.1 is now available as of today!…

(DIAGNOSTIC IMAGING) -- The overall number of attendees at this year’s European Congress of Radiology was 19,017, representing an increase of nearly 5% compared with the 2009 event, according to congress organizers.

There were 11,817 professional and 7200 industry/other delegates at ECR 2010. The country breakdown for professional delegates is given below. Of the 1036 radiographers who attended, 165 came from Denmark and 117 came from Norway.

By comparison, a total of… Continue

(DIAGNOSTIC IMAGING) -- When conducting a clinical audit, you should never assess other people’s work without their knowledge. You must audit teams, not individuals, and you should be constructive and confidential. Do not assign blame, and remember that poor performance may be environment-related, not person-related.

These are the golden rules of Dr. Jane Adam, founding chair of the Audit and Standards Committee of the European Society of Radiology. She presented them during… Continue

March 25, 2010 - Washington, DC – An American College of Radiology backed amendment was submitted by Sen. Sam Brownback (R-KS) on Wednesday (March 24) to strike from the Health Care and Education Affordability Reconciliation Act of 2010 (H.R. 4872) a provision raising the medical imaging equipment utilization rate from 50 percent to 75 percent, effective Jan. 1, 2011 for all imaging equipment priced over $1 million. Although submitted, the amendment was never offered for a vote as an agreement… Continue

(DIAGNOSTIC IMAGING) -- There has been considerable discussion on the federal stimulus program and the impact it will have in bringing about an improved patient care model through the use of technology. This anticipates care providers having access to electronic health records (EHRs) that can communicate, or “interoperate,” with other health providers and health systems so a complete record of all a patient’s episodes of care, including pharmaceutical records, are available in real-time for… Continue

Waste not, want not: Getting the most from imaging procedures

(DIAGNOSTIC IMAGING) -- The amount of data obtained in a single MR or CT scan is mind-boggling. At least some of the data radiologists throw away could save patients money while reducing their exposure to radiation and risk of complications from invasive procedures.

“The same CT or MR scans that have been performed for other indications can be used to measure epicardial fat volume,” Dr. Paolo Raggi told me. “That is why this is such an easy piece of information to… Continue

DIAGNOSTIC IMAGING -- Imaging studies at the 2010 Winter Olympic Games increased 65% from when they were last held in Torino, Italy. At the Vancouver games 950 imaging studies were performed, according to Dr. Bruce Forster, a professor at the University of British Columbia in Vancouver and the Vancouver Organizing Committee imaging supervisor.

As previously reported, radiology played its greatest role to date at the most recent Winter Olympics, continuing to build on previous games.… Continue

SAN MATEO, Calif.--(BUSINESS WIRE)-- Primordial, a leading vendor of communications, workflow, quality management and analytics applications for the medical imaging market, and Charlotte Radiology, one of the largest radiology groups in the United States, announced today a partnership to deploy and further develop Primordial's applications for use by Charlotte Radiology physicians across numerous hospitals and imaging centers.

As part of the agreement, Primordial will install its… Continue

(DIAGNOSTIC IMAGING) -- Too few younger practicing radiologists are prepared to embrace ultrasound and push it to its clinical limits, according to Prof. Lorenzo Derchi, a professor of radiology at the University of Genoa in Italy.

They can perform the most common examinations, but insufficient attention is given to the advancement of the modality in areas like contrast enhacement, volume ultrasound, and musculoskeletal ultrasound. And new examination techniques are often introduced… Continue

Please visit one of our new partner websites, Radlinks.ca - a new online resource focused on radiology education. You can also find their link from our Partners page.