We had the pleasure to recently review the 2View Mammography Specimen Container. Thanks to the team at 2-View for this opportunity. 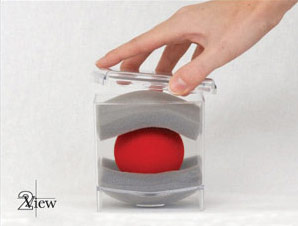 The product As mentioned on 2View's website, partial mastectomy specimen handling has challenges. Compression, lack of orthogonal views, and manual manipulation of the specimen are issues with specimen radiography. When there is no margin for error, a new device such as 2View mammography specimen container is a great idea. From the… Continue

The finding gives emergency room doctors and hospitals lacking expensive ultrasound machines an easier way to check for the clots that can kill, said Enrico Bernardi of the Civic Hospital in Italy, who led the study.
"Until this study nobody knew if the two techniques were equally effective and… Continue

Here's whats new on WID. (Remember that you may unsubscribe from our occasional news letters via the link at the end of this email, your email address and details will never be disclosed).

CIRSE 2008 in Copenhagen was an excellent event. As usual there was an excellent exhibition area with a large range of manufacturers displaying their latest and most innovative products. Here are a few that caught my eye:

Sonohysterography may be associated with less chance of endometrial cancer dissemination

October 20, 2008 (WISCONSIN) - According to a recent report published in the “American Journal of Obstetrics and Gynaecology” for September issue, it is found out that though sonohysterography is associated with transtubal fluid spills, there is less chance of endometrial cancer cell disseminating during any procedure.

Dr. David M. Kushner who is from the University of Wisconsin School of Medicine and Public Health in Madison told Reuters Health that Sonohysterography is performed… Continue

(REUTERS) According to a report by the Reuters Health, Autofluorescence Videoendoscopy improves the chances of discovery of Colon Polyp.

According to the results of a study undertaken by some Japanese investigators, Compared to the white light colonoscopy, a new Autofluorescence Imaging Videoendoscopy System (AFI) can improve the detection chances of colon polyps. AFI system is developed by Olympus Medical Systems.

The lead investigator of this study Dr. Matsuda told… Continue

It's that time of the year again. Many a medical student have navigated the waters of residency applications and the "interview trail." We here at radRounds are here to help you -- if you ever have any questions, please email us at residencyadvice@radrounds.com and dedicated volunteers who are staff attending radiologists and residents at premier institutions have volunteered to offer CONFIDENTIAL AND FREE advice. Our partner, Student Doctor Network (SDN)… Continue

According to a recent report published in the September issue of “International Journal of Cancer” notes that the inhibition of melanogenesis helps sensitize melanoma cells to the gamma radiation.

Dr. Andrzej T. Slominski from the “University of Tennessee Health Science Center” in Memphis said to the Reuters Health that he believes the concept is ready for clinical trials in the very near future. As chelators of heavy metals are allowed by FDA for treatment of diseases, the treatment… Continue

HOUSTON, October 15, 2008—The Radiation Therapy Oncology Group (RTOG) and US Oncology, Inc. today announced they have entered into a collaboration to increase patient access to national cancer clinical trials with a radiation focus in the community setting.

CT scans does not increase sensitivity of lung cancer detection

According to the researchers at New York University, the use of Computed Tomography to steer away bronchoscopy doesn't seem to increase the sensitivity of the lung cancer detection when compared the same with conventional bronchoscopy,

Dr. David Ost and his colleagues from the New York University had compared the ability of Computed Tomography scan-guided bronchoscopy with the conventional approach to detect the peripheral lesions and the mediastinal lymph nodes in approximately… Continue

Men suffering with locally advanced prostate cancer, addition of radiation related treatment to their anti-androgen hormone reduces the risk of mortality by 50% over a period of ten years, compared to the hormone treatment independently.

This is according to a randomized research presented on Monday at the “American Society for Therapeutic Radiology and Oncology's” fiftieth Annual Meeting held in Boston.

According to a recent research, there is a significant benefit of initiating hormonal therapy sooner in men suffering from early prostate cancer. Especially those men who experience a rapid doubling of Prostate-Specific Antigen (PSA) level within six months of the start of their radiation therapy.

The researchers were also view that holding on to hormonal therapy in men whose Prostate-Specific Antigen (PSA) increased more slowly in relatively longer period of time.

According to report in published in the August issue of the “Journal of the American College of Surgeons”, mortality because of postoperative colon cancer is higher in hospitals with a relatively high percentage of Medicaid patients.

Dr. Kim F. Rhoads said that the report emphasizes that this is the potential effect of resource inequality in different institutions on cancer outcomes. He said this report highlights the issues arising as American health-care economies are tightening… Continue

Latest study done in the University of Chicago has indicated that intensive and structured training might enable novices to read the Computed Tomography Colonography (CTC) studies with more accuracy than compared to the standard colonoscopy.

This study appears in online version of Radiology, Underscores the Computed Tomography Colonography’s (CTC) valuable role as a screening tool for colorectal cancer. The cancer which is the 3rd most frequently diagnosed and one of the leading… Continue

The results of a recent research indicate that around eighty percent of cancer patients who undergo radiation therapy may not be using any kind of medications to combat pain.

According to the report published in the “International Journal of Radiation Oncology, Biology, Physics” for the September issue reports that many patients do not undergo any medications to combat pain mainly due to fears of addiction and the cost of medication. Although, the most common reason for not using… Continue

Access to Mammography - a potential real concern for low-income women

A United States government study suggests that low-income women who are treated under free mammography screening may be bearing some personal costs to have the procedure.

In the United States, a government funded project known as the “National Breast and Cervical Cancer Early Detection Program” helps in covering the costs of cervical and Breast cancer tests for women. These women are usually at or below two hundred and fifty percent of the federal defined poverty line.

Patients with the age of 75 years and above and suffering with brain metastases respond as well as the younger patients to the Stereotactic Radiosurgery (SRS); this is according to a recent research published in the August 15th issue of Cancer.

The authors explain that several studies have in some way or the other demonstrated the survival advantage of treating brain metastases with SRS, but till date there has never been a detailed examination of the utility of SRS treatment in… Continue

According to a research report published in the August issue of “Arthritis & Rheumatism”, Power Doppler ultrasonography monitors the response of rheumatoid arthritis (RA) to the treatment with Anti-tumour Necrosis Factor (TNF) agents more accurately than any other system does.

Dr. Esperanza Naredo of the Severo Ochoa Hospital in Madrid said that “Power Doppler ultrasonography” is more sensitive and that is why possibly more predictive than the clinical evaluation of the RA… Continue

A recent study of the normal brain activities using PET technique suggests that individuals who are in a minimally conscious state (MCS) have greater chances of perceiving pain and hence should receive analgesic treatment.

Senior author of the report Dr. Steven Laureys told Reuters Health that the major finding of this research was how these patients' brain responds to pain in a way that is very similar to the normal brains and how this is different from what is seen in Persistent… Continue

The results of a recent study suggests that in evaluating the images of mammograms done for breast cancer, one reader attached to a computer might perform just as good as or sometimes even better than two readers,.

In this research study reported and published in “The New England Journal of Medicine” for the second Week of October and released ahead of the print itself, the specificity, sensitivity, and the positive predictive values for both the reading protocols was almost the… Continue

The innovative folks at OsiriX have just released the latest version (3.3f2). You can find it here: http://downloads.sourceforge.net/osirix/OsiriX3.3f2.zip