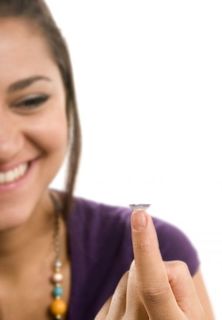 In Scotland, a contact lens that had gone missing for nearly three decades was finally located when the owner of the lens underwent an MRI for upper eyelid swelling and ptosis.

The MRI had indicated a cyst with proteinaceous content. When surgeons made an excision of the cyst, a rigid gas permeable (RGO) lens was discovered, deep in the upper eyelid soft tissue. “The features on the MRI were in keeping with a cyst with proteinaceous content. There were no radiological features of a foreign body seen within the cyst,” wrote the patient’s ophthalmologists in a report published in BMJ Case Reports.

The disappearance of the contact lens was due to blunt trauma the patient suffered as a teenager. “The patient was hit in the left eye with a shuttlecock while playing badminton at the age of 14. The patient was wearing an RGP contact lens at the time, which was never found,” said the physicians.

There have been other cases of MRI finding strange, long-forgotten objects. Like the 47-year old male who was diagnosed with cancer before the MRI detected a Playmobile traffic cone in his lungs. In France, an X-ray found 12 pounds of coins in a patient’s belly to be the culprit of his stomach pain.